How to use a library in online KeilStudio IDE. LPC1768 and nRF24L01

I want to use an LPC1768 and nRF24L01 to receive small slow data(temperature and pressure) from another nRF24L01. So I will need to implement SPI on the LPC1768. I need to decide which pins to use and then I need to refer to them in code. Here is a link to pinout LPC1768[mbed LPC1768 | Mbed]

I am using this library NRF2401P [NRF2401P - This is a work in progress for an NRF2401P | Mbed] As a complete beginner I build the code step by step so before implementing anything I import the library. ` I used the KeilStudio-“File-Add mbed library to active project” command.

Those error usually means that your program is based on Mbed OS 6 which has a Serial API deprecated. I recommend. Adding this library to Mbed OS 5 program (you can create a new Mbed OS 5 program using File->New->Mbed Project functionality).

Adding this library to Mbed OS 5 project should work correctly: 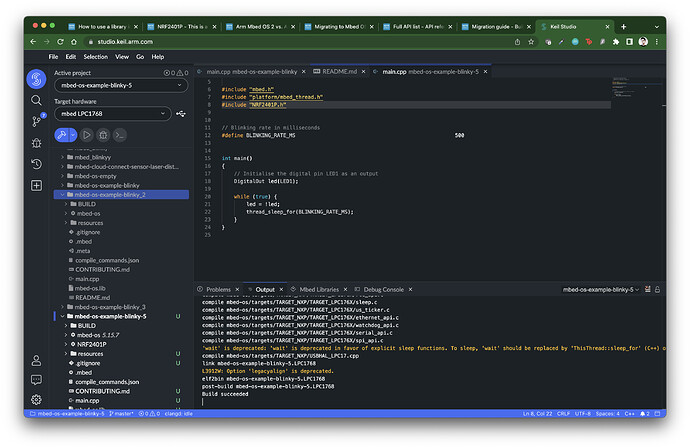 You can find more about deprecated APIs in this section: Full API list - API references and tutorials | Mbed OS 6 Documentation

Thanks Arek for such a quick response.

Hello. I find that when “Connect to target hardware” in KeilStudio i have the message "Connected device is unsupported. It is an mbed LPC1768. I have downloaded an example hello_world nRF24L01 | Mbed for LPC1768 and nRF24L01 . The KeilStudio Cloud is 1.5.53. I have previously uploaded the example ms-os-example-blinky which works ok so obviously the LPC1768 is supported. Does this mean that the nRF24L01 is unsupported even though there exist several libraries for it? I am a little confused.

Hi Arek. You can see I am in need of a tutorial on using the KeilStudio and a device such as LPC1768. Can you point me to some resource where I can get some of these basic questions answered instead of bothering you?

you need separate two things. Issues connected to the tool, the Keil Studio Cloud in this case, and issues what are in context of MbedOS version and its compatibility.

MbedStudio and KeilStudioCloud (KSC ) are able to build, deploy and debug, but deploy and debug may not be available for all targets now. Unfortunately the LPC1768 is in the group of these targets, but the time is coming New beta firmware for LPC1768 - Keil Studio - Arm Mbed OS support forum
So, until this is resolved, you will have to upload the binary with drag & drop method with binary what will be generated and downloaded via KSC and your browser.

Issues like you wrote above about Serial API are connected to Mbed OS version compatibility.
Mbed’s versions:

I hope I made an answer for your questions, but do not be hesitate to ask for more.

Hi Jan and thanks for rapid reply. So after following instructions to upgrade to beta firmware I have a virtual comm port which I can now access using an external program(though I cant access in mbed Studio). I can see the output of my program successfully there. Here is the program

Apologies. I found a link in documentation how to install the CLI

I can not verified and test the binary, but I tried in KeilStudioCloud.

And to be honest if you have problems with KeilStudio, then I am not sure you will able to do that with CLI.